ASN starts the construction of Africa-1, a new subsea telecom system to connect Africa, the Middle East and Europe

Further to the supply contract coming into force, the Africa-1 consortium - currently formed of Etisalat, G42, Mobily, Pakistan Telecommunication Company and Telecom Egypt (with other parties expected to join soon) - and Alcatel Submarine Networks (ASN) have started the implementation of a new telecommunications optical submarine network.

This 10,000 km cable will provide 8 fiber pairs to connect Africa and the Middle East eastward to Pakistan and westward to Europe, increasing the available transmission capacity between Asia and Europe.

The Africa-1 system is expected to be ready for operation by end 2023 and will initially have landings in Kenya, Djibouti, Pakistan, United Arab Emirates, Kingdom of Saudi Arabia, Egypt and France. The system will also land in Sudan, cross Egypt through diverse new terrestrial routes on the way to France, and further connect other countries in the Mediterranean such as Algeria, Tunisia and Italy. 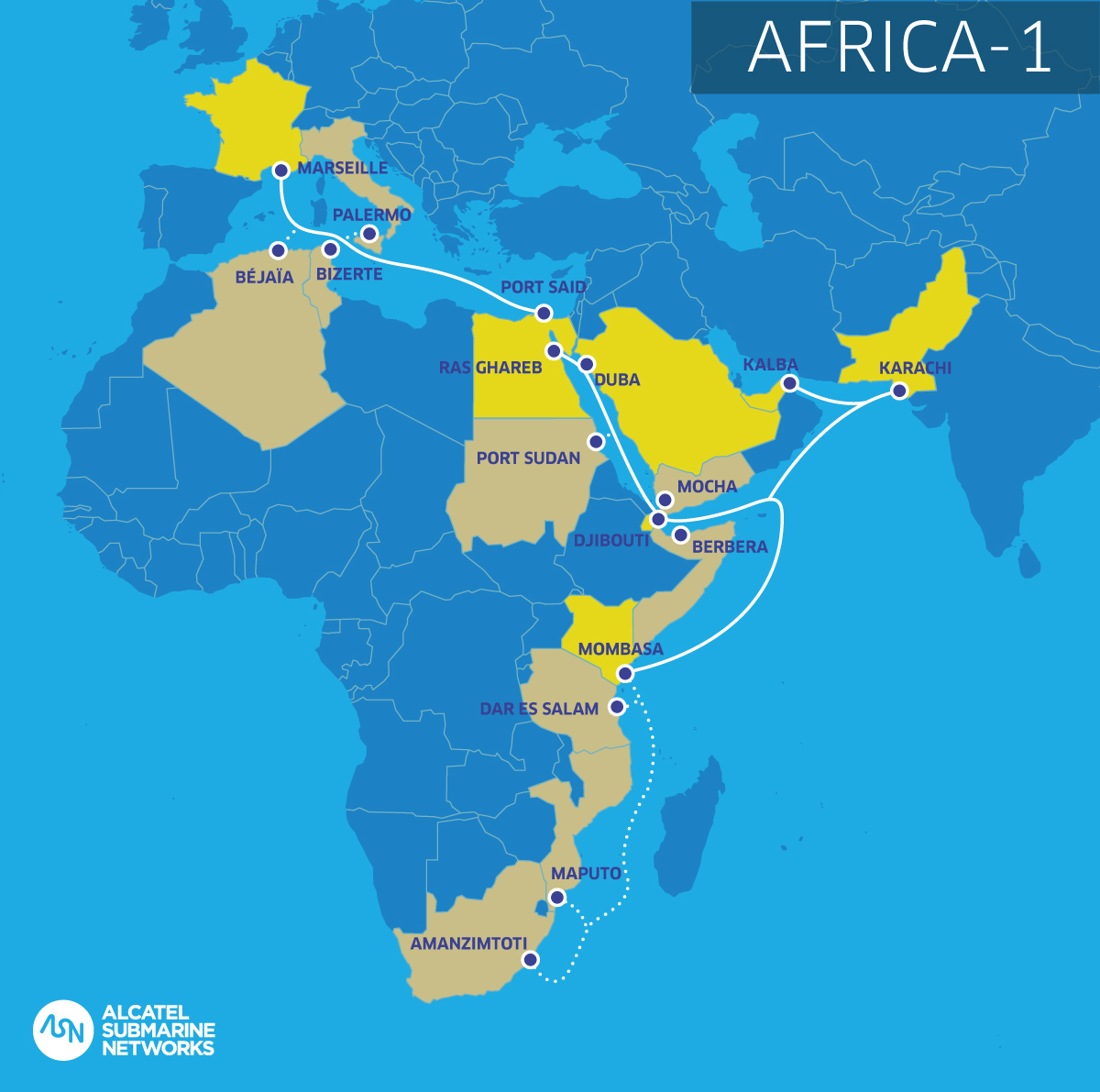 The next phase will include additional landings in Yemen and Somalia, as well as an extension from Kenya to South Africa with intermediate landings in Tanzania and Mozambique.

The Africa-1 system will support Africa, the Middle East, Pakistan and other Asian countries on their journey to digital transformation and will make it possible to transport ever-increasing volumes of traffic between the three continents.

Alain Biston, President and CEO of Alcatel Submarine Networks said: “We are proud that the Africa-1 consortium members have chosen ASN, their trusted and experienced partner in the region, to build and to deploy the Africa 1 system, an addition to the global network that will interconnect millions of people and take part in the digital development of the whole region”.

Alcatel Submarine Networks, part of Nokia, leads the industry in terms of transmission capacity and installed base with more than 650,000 km of optical submarine systems deployed worldwide, enough to circumnavigate the globe 15 times. From traditional telecom applications to content and “over the top” service provider infrastructures, as well as to offshore oil and gas applications, ASN provides all elements of turnkey global undersea transmission systems, tailored to individual customer’s needs. An extensive services portfolio completes its comprehensive offering for the submarine business, including project management, installation and commissioning, along with marine and maintenance operations performed by ASN’s wholly owned fleet of cable ships.